Thank you to the Daily Camera for publishing our Guest Opinion, A unique chance to achieve South Boulder Creek flood mitigation, last week.  Here is an excerpt. 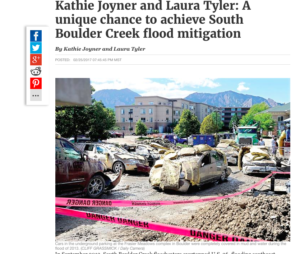 In September 2013, South Boulder Creek floodwaters overtopped U.S. 36, flooding southeast Boulder neighborhoods and putting thousands of people at risk. Emergency responders could not access the neighborhoods despite calls for help. There was no way to evacuate the area with egress roads impassable. Floodwaters poured into homes, including the Frasier Meadows Retirement Community, putting at-risk residents at even greater risk. Those of us who experienced flooding in these neighborhoods are amazed there was no direct loss of life in our neighborhood.

Visit our website, https://www.southbouldercreekactiongroup.com/boulder-flood-2013/ to watch several short videos depicting the flood of 2013 in southeast Boulder.

For 3.5 years the South Boulder Creek Action Group (SBCAG) has actively advocated for the implementation of flood mitigation to prevent South Boulder Creek from again overtopping U.S. 36. Our efforts have included communications with members of City Council, city boards and staff, the Boulder County Board of Commissioners and the County Land Use Planning Commission, and we thank them all for their willingness to engage with us repeatedly.

City efforts to implement effective flood mitigation to protect those living around and downstream of South Boulder Creek have spanned almost 20 years, with the latest beginning in 2009. Numerous options reviewed prior to 2009 were not feasible for a variety of reasons. Consequently, no flood protection was ever implemented, leaving downstream residents in harm’s way, year after year.

Finally, after years of study and analysis by the city and its consultants, as well as a variety of opportunities for public participation, a preferred South Boulder Creek flood mitigation alternative — option D — was approved by City Council in August 2015. Considerations in the selection included extensive engineering analyses, benefit-cost analyses, environmental issues (water quality, natural environment protection, threatened and endangered species, etc.) and other city policies. This alternative is dependent on the cooperation of three entities — the city of Boulder as the flood mitigation sponsor; CU, which has offered 80+ acres of CU South property for flood detention; and the Colorado Department of Transportation (CDOT), which has agreed to allow construction of the flood mitigation berm within their U.S. 36 right-of-way.

This is the first time in the long history of the project that interagency cooperation among three willing partners — the city, CU and CDOT — makes the South Boulder Creek mitigation project feasible. This is a unique situation given the prior unsuccessful efforts, and one that we in downstream neighborhoods fully support. It presents one of the best opportunities in decades to finally resolve this critical health and safety issue for thousands of Boulder residents now living in harm’s way . . .

Read the full article in the Daily Camera.